I’ve been waiting to write this post for a while. I’m not sure why. Maybe it was to let my city start to heal, maybe it was to make sure that I did it justice, or maybe I just wasn’t ready yet. Whatever the reason, here it is.

April 15, 2013 started off like any other gorgeous spring day in the city. Chris had just gotten on a flight to L.A. for work, and I was taking the dog out for a walk. I remember how all I could think was “Today is perfect.” The sun was shining, there were a few puffy clouds in the sky, and it was warm, but not hot. Almost perfect conditions for one of my absolute favorite days of the year – Marathon Monday. 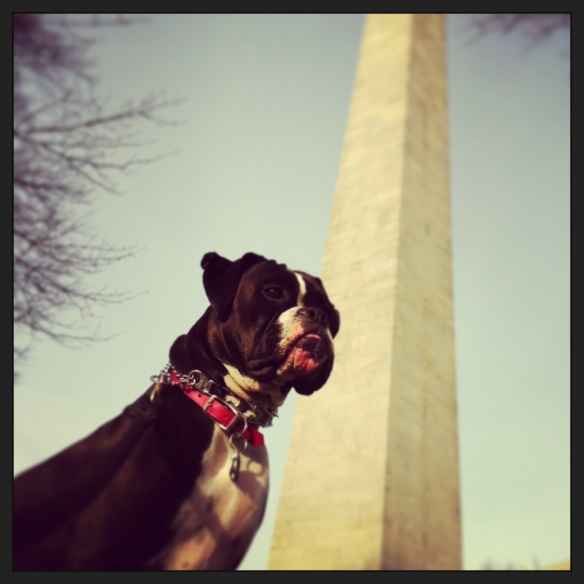 I instagramed this photo with the caption “Happy Marathon Monday!”

I had treated myself (and Zoe) to a dog walker for the day so that I could go watch the marathon and not worry about her. I packed my waterbottle, snacks, and my cell phone and headed off to my spot – just beyond Mile 26 on Boylston Street, in front of the Gucci store near the Prudential. 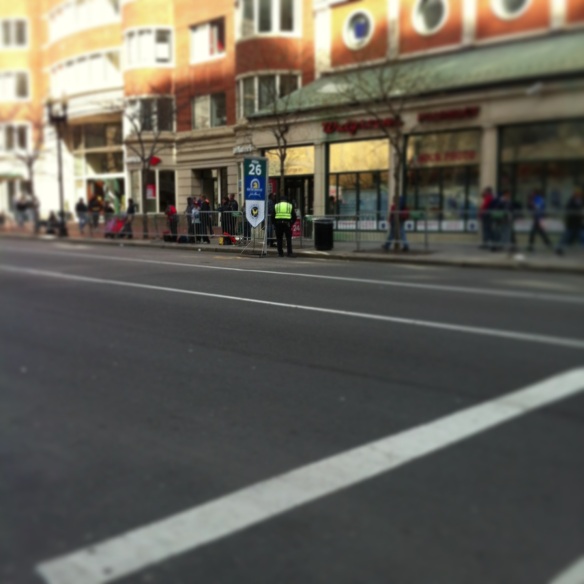 I’m starting to shake as I type this. It’s still so raw and emotional.

I got to my spot at my usual (absurdly) early time – 9am. Each year I end up next to the same man from Philly. We’ve watched his wife run by together for 3 years now. The funniest part is that we’ve never exchanged names in all our time standing on the side of the road together. Our morning went as it usually did.

With the country still reeling from the horrors in Newtown, CT, the BAA had done it’s part to pay tribute to the victims. It’s hard to see from my picture, but the Mile 26 marker was decorated with the town seal from Newtown. Families of the victims had been invited to sit in the VIP stands at the finish line. I believe there was a moment of silence held at the starting line for those young lives lost.

I started my usual obsessive checking of twitter. As the crowd built up around us, I announced the updates of both the Marathon and the Red Sox game. We watched as the wheelchair racers came through, and I clapped and screamed for them. Then we watched as the elite women came through 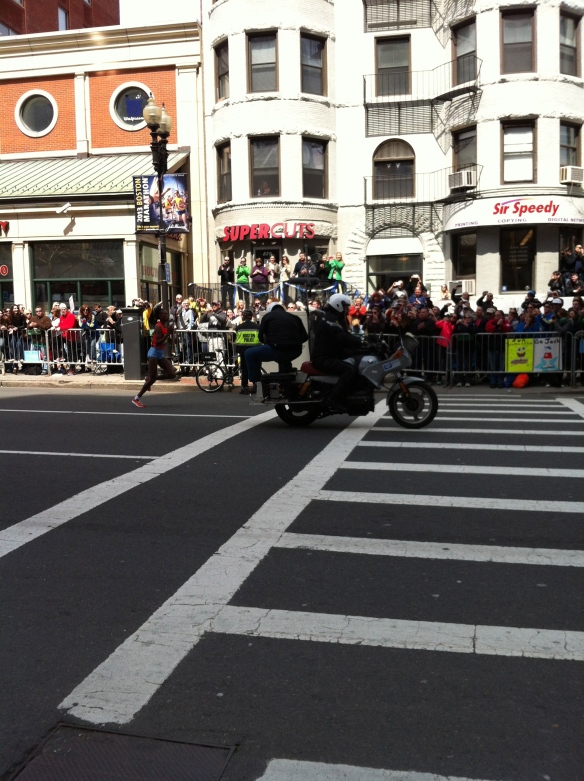 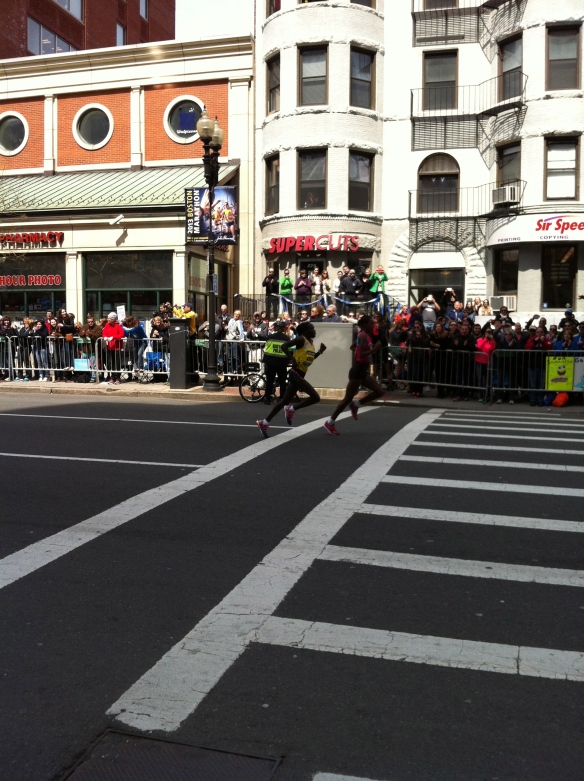 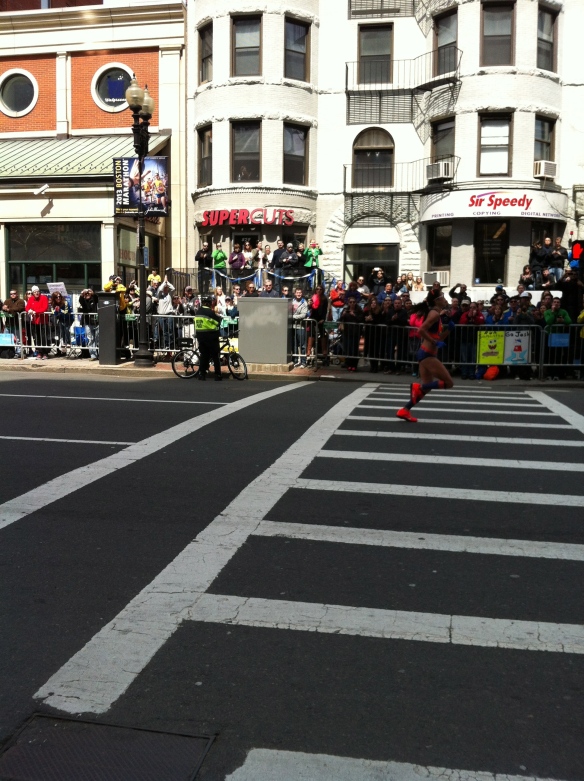 Then we watched the elite men come through: 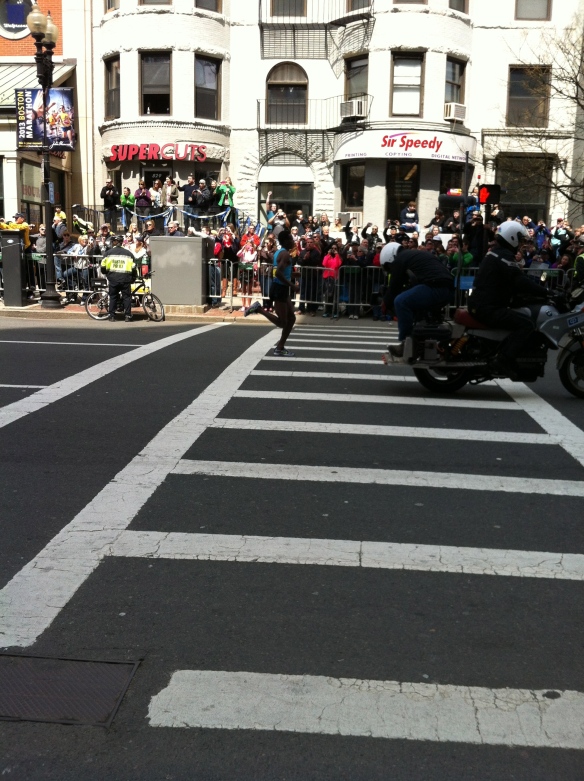 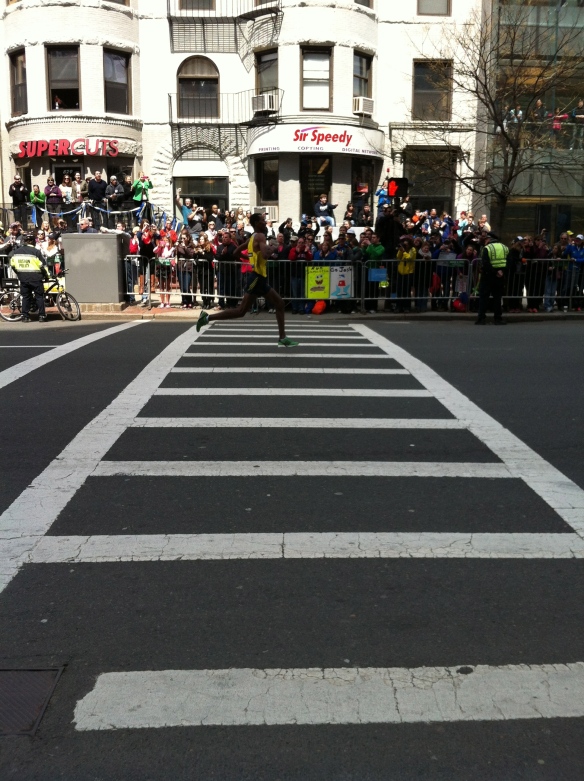 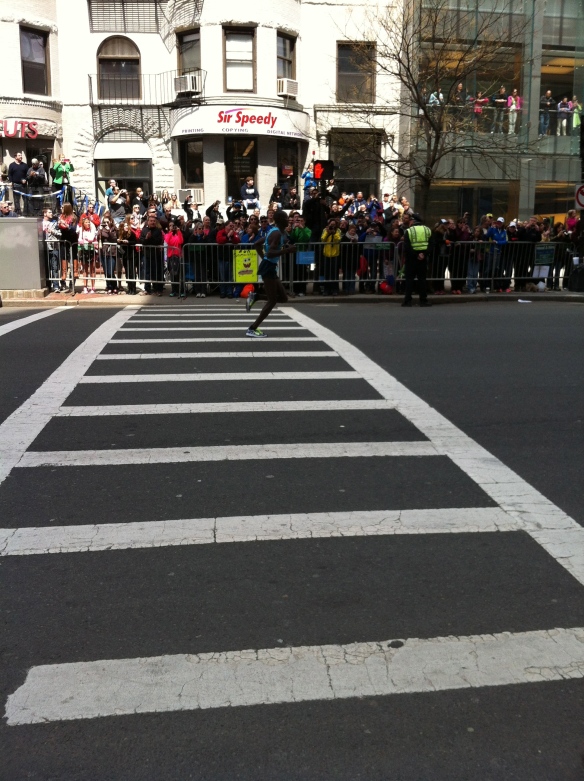 And finally it was getting to the fun part – watching everyone else come through. Those who train as hard as elites, and those who have an elite love of the sport. We watched my Philly friend’s wife come through. A few minutes later he took off to go find her. I was standing with another woman we had met that day, I believe she was from Ireland. We had watched her husband run by much earlier, around the 3 hour mark. She stuck around with me until it was mostly charity runners were coming through. Then she also started walking back to her hotel to meet her husband. I was still waiting to see a few friends run by, so I hung out a little longer.

Everything from this point on is cemented in my brain in slow motion – it will never go away.

I was laughing at a bunch of people walking down the sidewalk across from me with giant “Life is Good” heads on sticks when the first bomb went off. My initial reaction was that it was a cannon. This is Boston after all, on Patriots’ Day, so cannons aren’t abnormal. In fact, here where I live, I hear a cannon at 8 am and at dusk every single day. I remember looking down Boylston Street, and seeing the smoke from the “cannon” in what I thought was Copely Square. The conversation in my brain went exactly like this:

“That’s cool, they shot off a cannon for the winners”

“wait, the winner went through a while ago.. there’s no reason for a cannon…”

I heard a man behind me say “That wasn’t good” and the cop in front of me grabbed his radio and screamed “What the F- was that?!” and took off running towards the noise. That was when I got a little nervous. I picked up my bag – just in case – and the second bomb went off. It was just about a half a block away from me on the other side of the street. I turned and started running in the opposite direction. I was immediately swallowed up by a stampede of people running the same way. I watched a few people fall and get stepped on, luckily good Samaritans helped them up. I watched people scoop up their children and sprint. I watched as the happy faces and cheering spectators turned into terrified, running masses.

I remember thinking “The bombs are coming this way, they are just going to keep going off all the way down Boylston. I NEED to get out of here” I also remember thinking “I need to get to the hospital, they are going to need all hands on deck”. I got stuck in the crowd and got pushed into the Prudential Building.

As soon as I got inside the door, every muscle in my body tensed up, and I knew immediately I had to be out of that building – what if it was the next thing that exploded?

I sprinted out a door and kept running until I could get to a spot where I wasn’t in the stampede. At that point I was next to the Hynes Convention Center. Everything in my body was screaming at me to get away from the buildings – to keep running, but I had to know what was going on. I called my mom and begged her to tell me what had happened. At that point it hadn’t even hit the news. What felt like an eternity to me, hadn’t even been 2 minutes. She and my dad were on their way into the city. They were watching as a massive line of emergency vehicles went barreling past them. Then she told me there were two bombs that had gone off. I told her I was safe and that I was going to run to the Esplanade and then walk home.

As I was running towards the river I called the hospital. I told the charge nurse on my floor what had happened. She still tells me to this day that it was one of the scariest phone calls she’s ever gotten, and that at first she thought I had lost my mind.

I realized I had been meaning to meet up with a bunch of friends who hadn’t made it to me yet. I began the frantic phone calls and text messages to find them. With the exception of one of my friends, everyone had been at home when the bombs went off. One of my friends was in between the 2 bombs that went off. She got pushed into the basement of a random building and then was forced to flee to the river via back alleys and people’s basements. Luckily though, she was safe.

The walk to the hospital was one of the worst of my life. There were people crying and just looking shocked all over. Runners with their space blankets on trying to find their families. People screaming out names trying to find each other. Frantic phone calls were being made. The only other sound you could hear were sirens. So many sirens.

I wanted to cry, I wanted to throw up, but nothing happened. I just kept walking.

Two of my friends met me at the hospital. The moment I saw them the flood gates opened. I couldn’t stop crying. The reality of what had just happened was so overwhelming. When I finally calmed down we walked into the lobby of the hospital. I had been wearing my Marathon jacket from 2009, the year I ran, so people immediately thought I had been running. I had a reporter ask me some questions, but I just wanted to go home. My floor was doing OK at that time and didn’t need me to work. The City of Boston did an unbelievable job of dispersing the victims so that the hospitals were able to handle all of the injuries safely and effectively. It still, to this day, blows my mind that so many lives were saved.

Walking home from the hospital felt like an eternity. As we neared North Station we saw groundskeepers sprinting to all of the trash cans, tearing them open, and duct taping the doors open. That was when we heard the first reports that the bombs had been in trash cans. I refused to walk through North Station. I still couldn’t stand the thought of being inside a building. We walked the long way around the outside.

At some point in all of the madness I remember that I called Chris. He was still in the air at that point, flying to California. I would find out later that since he was flying Jet Blue, the TVs on the plan were showing reports of the bombings. He had to wait 45 minutes, knowing how close I was to them, to find out I was safe. I left him a message and as soon as he was able to, he called to see if I was OK.

There were also innumerable text messages and phone calls. All of my friends and co-workers know where I go on Marathon Monday, and I feel so blessed to have so many people who care about me. I got to the point where all I could do was copy and paste “Yes, I’m OK” to the over 65 text messages I got within the first 5 minutes after news of the bombings hit.

I have said it a million times and I will continue to say it “I don’t understand why runners – it’s not like we even run with sticks!”

One of the eeriest things for me is the immediate change in my tone that can be seen on twitter: 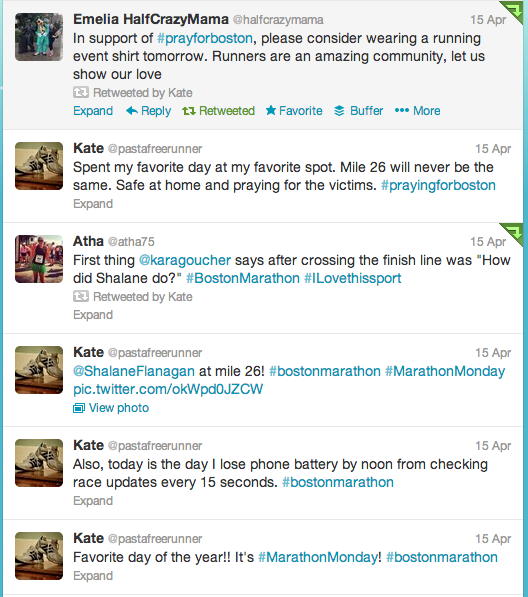 Even after all this time, it makes me cry every time I look at it. It goes from being what it should be – pure joy – to what it quickly became – shock and sadness.

The immediate outpouring of support for my city was incredible. The donation to the One Fund from the London Marathon, the ad in the Chicago Tribune, and even local support such as the lighting of the Lenny Zakim Bridge and the TD Garden in the BAA colors of blue and yellow helped to dull the pain. 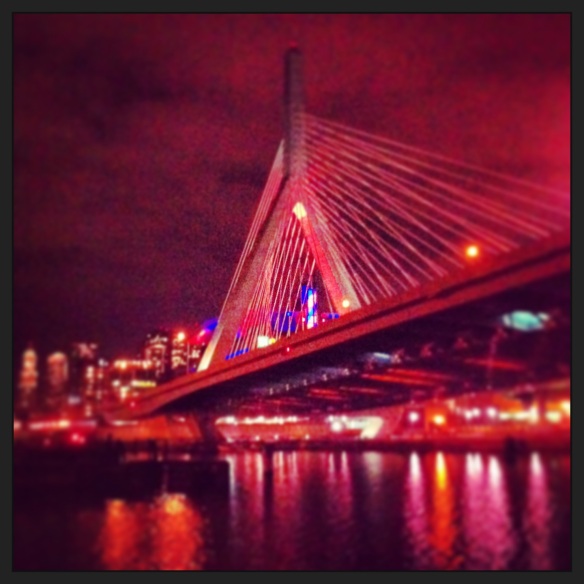 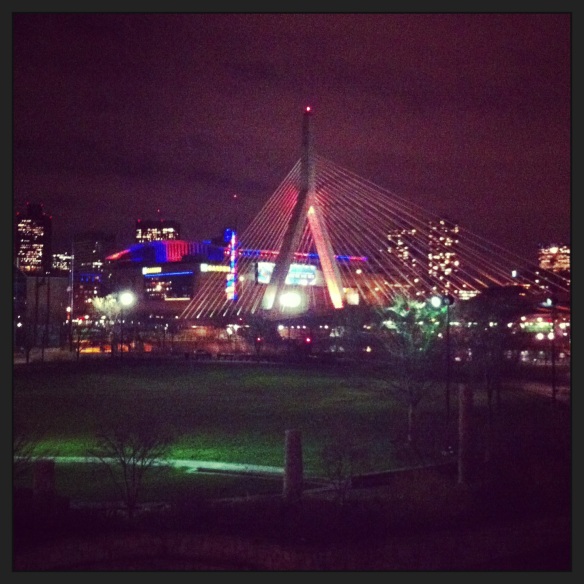 The memorial became a place where you could go to just pay your respects, and thank those who had rushed in when the rest of us ran away. People left everything from balloons, to shoes, to their own Boston Marathon medals. There were jackets, sports jerseys, flowers, and signs. I brought down my singlet and my sister’s T-shirt from the 2 years we ran. I added on a bib number with “BostonStrong” and 617, which is the main area code here. 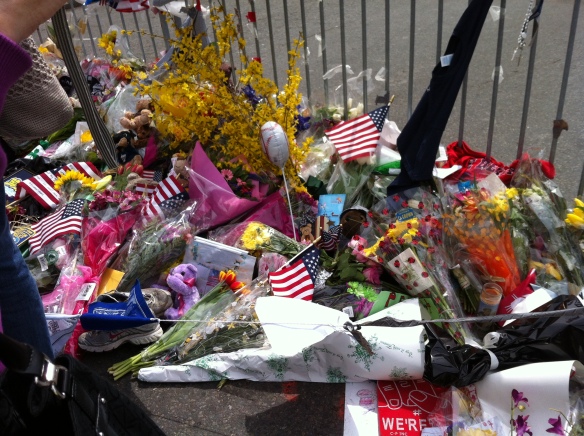 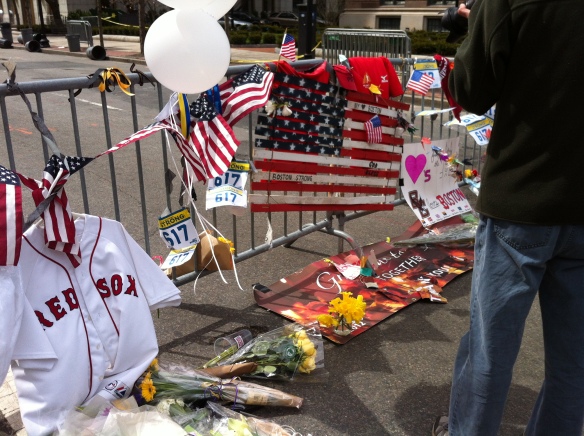 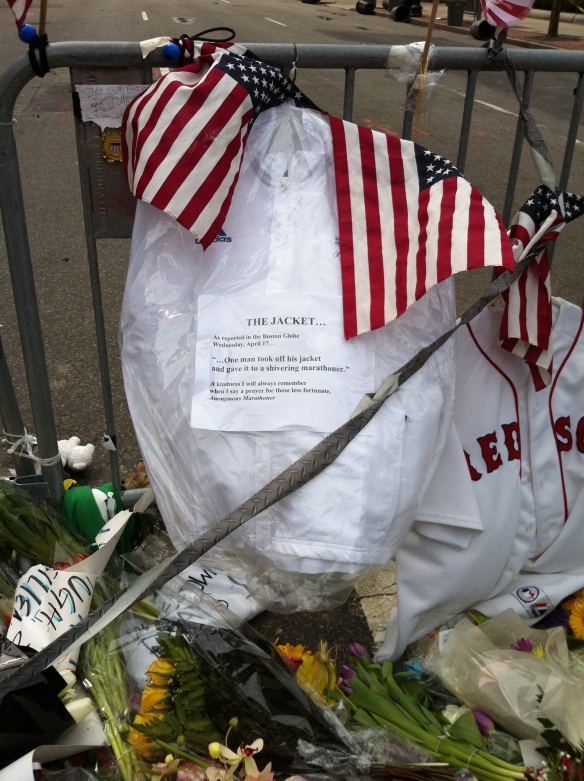 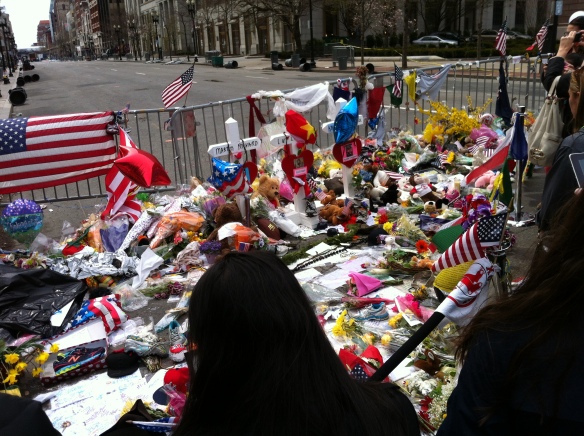 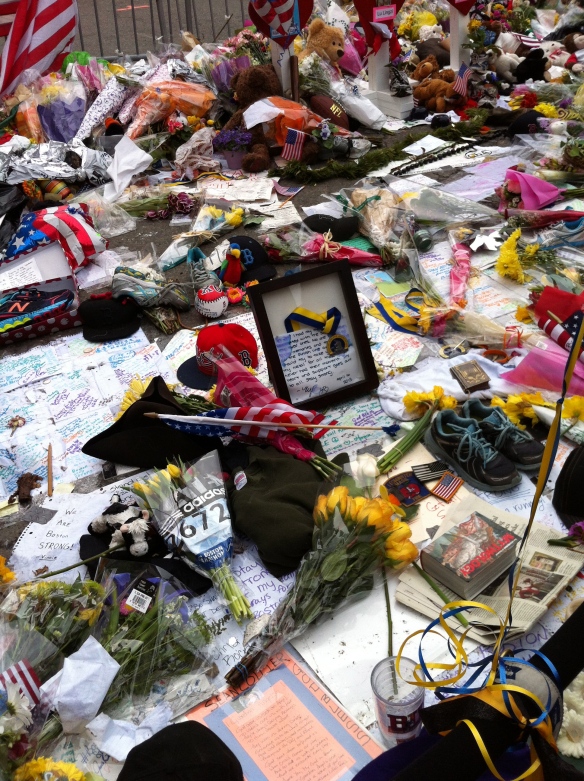 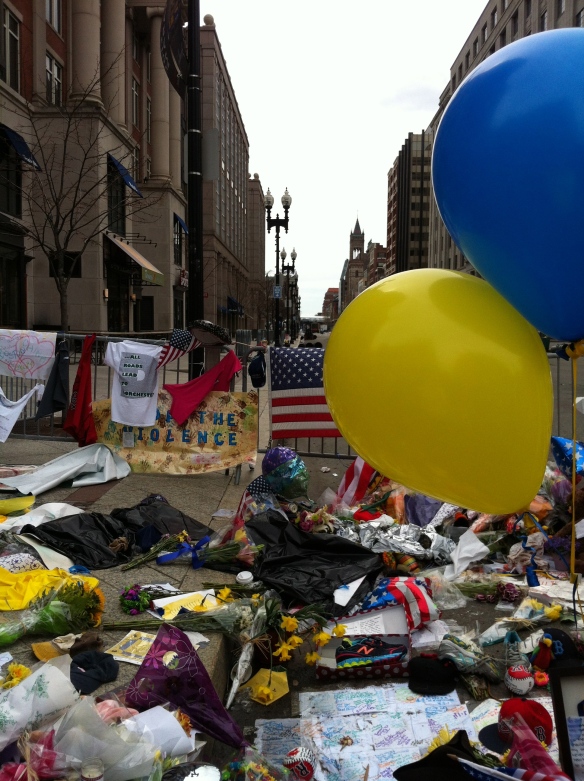 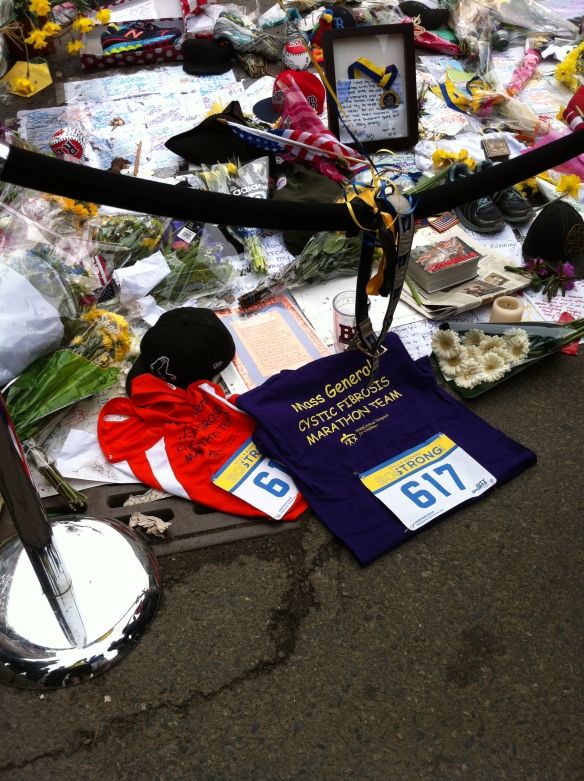 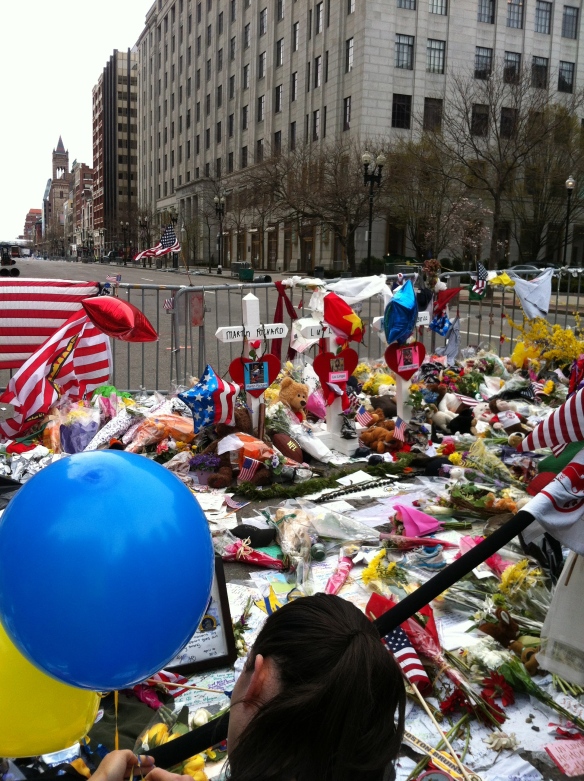 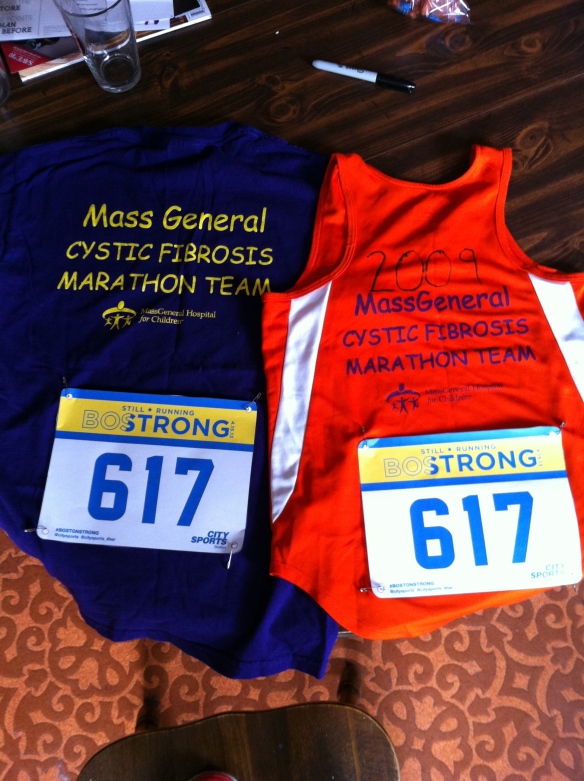 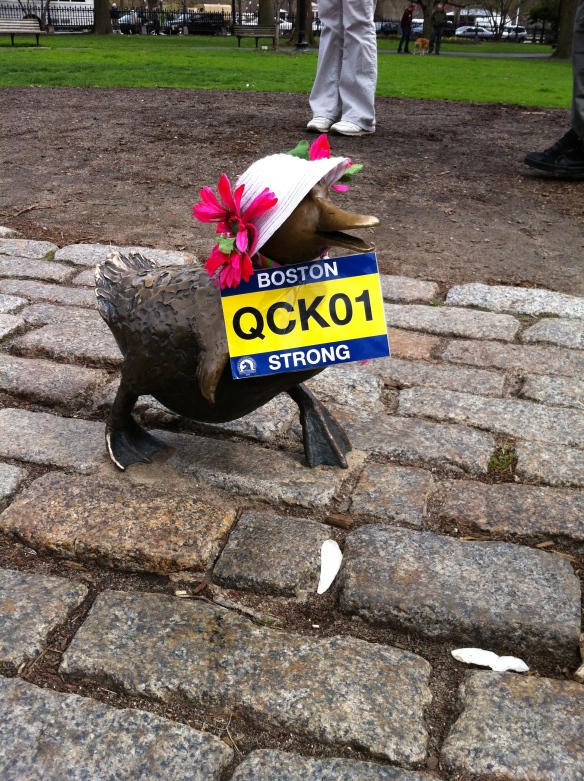 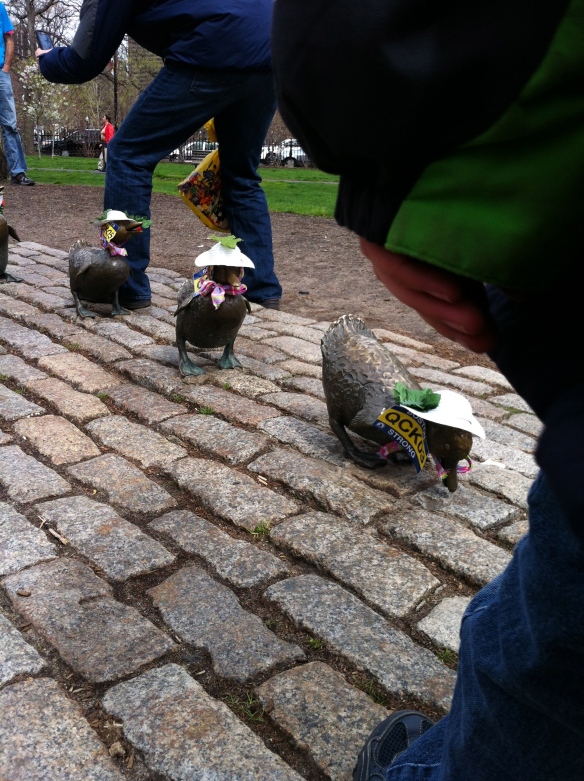 My city has been forever changed, but the good news is that I know it has made us stronger. As President Obama put it “We may be momentarily knocked off our feet, but we’ll pick ourselves up, we’ll keep going. We will finish the race. (Source)

So come April 21, 2014 you will see Boston, once again in all of its glory. The sidewalks will be packed from Hopkinton to Boylston Street. Thousands of people will cross that finish line and we will come back, and we will finish OUR race.